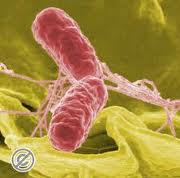 Yikes! A recent report indicated that Jimmy Johns is linked to an outbreak of the E. Coli virus. This is the 4th time that Jimmy Johns has been responsible for delivering food containing various virus infections and diseases. In both 2009 and 2011, Jimmy Johns was responsible for an outbreak of salmonella that reported over 140 cases in the midwest including Kansas City, Missouri. Once again, this outbreak has been found in the Kansas City area, as well as cities in Kansas, Iowa and Colorado.

The E. Coli has been linked to the clover sprouts served at Jimmy Johns. The sandwich chain switched last year from alfalfa sprouts to clover sprouts to try to deter the spread of salmonella, but this year the new clover sprouts caused an outbreak of E. Coli instead. The problem with these sprouts, both alfalfa and clover, is that they are grown, stored, and shipped in a moldy, moist and warm environment, adding to the likelyhood of producing the salmonella and E. Coli virus infections. Despite popular belief, sprouts of any kind are actually VERY low in nutrients, almost as worthless nutritionally as lettuce, so if you think that you are being healthy by eating lettuce or sprouts, you are wrong. You are basically eating water. So at least for awhile, we here at Kansas City News would recommend staying clear of any kind of sprouts until this E. Coli virus outbreak is contained.

WebMD reports the specifics of the E. Coli virus as follows:

There are many conditions with symptoms similar to those of E. coli infection. Diagnosis of E. coli infection can be complicated by the fact that most bacterial infections that cause diarrhea are accompanied by a high fever. If you have no fever or only a mild fever, your doctor may suspect that something other than bacteria is causing your symptoms.

Symptoms of E. coli infection usually end in about a week with no further problems. But severe blood and kidney problems may occur within 2 weeks after the onset of diarrhea. These problems can cause kidney failure and sometimes long-term disability or death in some children and older adults.

You do not have to sign up to comment! If you have any trouble publishing your comment, try hitting the "Preview" button to publish from there. Thanks you from Kansas City News!
at 11:14 AM

Jimmy Johns has always been up or down for me, sometimes it's good and sometimes it's kind of nasty. With the E. Coli in effect now I'm leaning towards nasty.

yeah, this is the second break out of e coli from Jimmy John's - they should just give up on the sprouts all together. A little side note to anyone who thinks that they are being healthy when eating sprouts, they have absolutely no nutritional value whatsoever. Look it up.