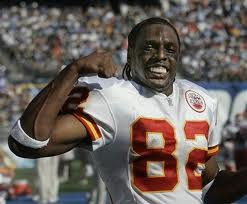 The Chiefs are making some moves in the off season and the biggest one so far happened today when the Kansas City Chiefs put the Franchise Tag on Dwayne Bowe, the Chiefs somewhat flaky but occasionally talented wide receiver. It's pretty sad when a team has to put a franchise tag on a mediocre player, who in the case of the Chiefs hardly gets a chance to make game changing differences. With two mid level quarterbacks on the roster, and an offensive line made of swiss cheese, the Chiefs have MUCH bigger fish to fry than to put a franchise tag on a slightly higher than mediocre wide receiver like Dwayne Bowe.

After an extremely lackluster 2011 Chiefs season, Dwayne Bowe put up a lukewarm 81 receptions for a measly 5 touchdowns - yikes! That's what the Chiefs call franchise tag material? Wow, we must be worse off than we thought. This is a sign that the Chiefs offense still has no direction whatsoever and we could be in for another 10 touchdown season total from this sputtering offense. Here at Kansas City News we have never been fans of Matt Cassel, figuring him to be the NFL's highest paid "back up" quarterback. With the franchise tag, Dwayne Bowe's salary will be 9.5 million dollars in 2012. He is a good back up quarterback, and did lead the New England Patriots to the playoffs when Tom Brady went down - but the fact that we paid this guy almost 60 million dollars to come play for the Chiefs is just plain ridiculous. With mediocre quarterbacks like Matt Cassel and Kyle Orton at the helm, putting the franchise tag on Dwayne Bowe just doesn't make any sense. If there is no one to get the ball to our receivers, then why are we putting such a high priority on them? The Kansas City Chiefs are going to be a defensive team, there is no doubt about it. We've made Romeo Crennel, who will absolutely be focusing on the defensive side of the ball, our head coach. And what is worse, we've brought in a terrible offensive coordinator from Miami in Brian Daboll, who had a miserable offensive season in 2011 with the Dolphins.

The Kansas City Chiefs need to realize where their priorities are and they need to do it fast. Putting the franchise tag on Dwayne Bowe is not the first thing that Chiefs fans wanted to hear in this off season. What we want to hear is that the Chiefs are going to look for a REAL quarterback, invest top draft picks on offensive lineman, and try to find a way to get our offense back on track. Thank God that Jamaal Charles is coming back, that should take some of the spotlight off of our hideous passing game. The Chiefs defense looks great and I think that the defense alone can get The Kansas City Chiefs 7-9 wins in 2012. Let's just hope that they don't put the franchise tag on any more wide receivers - who's next, Dexter McCluster?

You do not have to sign up to comment! If you have any trouble publishing your comment, try hitting the "Preview" button to publish from there. Thanks you from Kansas City News!
at 4:46 PM

Well, we need to look at the offense for sure, but I think that the Chiefs need more help at quarterback and at offensive line right now. Dwayne Bowe is OK, and he did have 15 touchdowns in 2010, so we will just have to wait and see on this one...