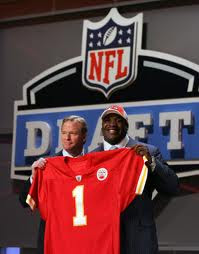 Most Kansas City sports writers are basically writing updates, assuming that we already know about what happened the week before this, or the week before that. Well, here at Kansas City News, we're going to do you a favor that those half assed sports writers refuse to do, and that's give you a full recap. This week, some top analysts talked about all of the Kansas City Chiefs roster moves, free agency pick ups, and possible 2012 NFL Draft picks for the Chiefs. So here it is, Chiefs fans, a complete wrap up by the NFL's top source:

On what free agents the Chiefs are still looking at: Jerricho Cotchery, the WR from the Steelers, is visiting with them today. They like him and want to add a veteran WR so I think a deal is possible.

On why the Chiefs didn't get Peyton Manning: The Chiefs never got in the game with Manning. Basically, they told him they wanted in and he told them, as well as some other teams, that he wasn't interested.

On whether the Chiefs will pick up a Nose Tackle in the 2012 NFL Draft: It's starting to look that way. That's their one remaining pressing need. But the Chiefs also have the luxury more than other teams of drafting best available player. They can find a NT elsewhere

On who the Chiefs have yet to pick up: A veteran WR, like Cotchery. Maybe some backups that they like. They'll still sign some more players but I think at this point, with possible exception of a NT, they'll all be backups.

On the Chiefs drafting Luke Kuelchy in the 2012 NFL Draft: With Johnson and Belcher, the Chiefs are OK at ILB. But with their moves in free agency, they have the flexibility to draft him or any other player they like. That one wouldn't surprise me at all.

On whether or not the Chiefs will see the Denver Broncos on Monday Night Football in 2012: Schedule should be out in April and it will be interesting to see how that works out. Would think that would be one of the more attractive games on Denver's schedule as far as TV goes.

On the recovery of Jamaal Charles, Tony Moeaki and Eric Berry from their ACL injuries: The Chiefs are saying they will be. Those injuries, generally speaking, are nine-month injuries so that would put them all back by June, if it holds in their cases.

On who will be the Chiefs fullback in 2012: Looks like Hillis will do some of that. I can see him spending a lot of time in the same backfield with Charles or McCluster. Chiefs could also sign or draft a fullback.

On whether or not the Chiefs have the best players in the AFC West for 2012: Since free agency isn't over and the draft is more than a month away, it's too early to say. But they've got to at least be contenders in that regard. If Berry, Charles and Moeaki are healthy, I think I would take their lineup over anyone else's in the division.

On the Chiefs quarterback situation in 2012: I don't think Orton would have been a huge upgrade over Cassel. If the Chiefs surround either one with a strong defense and a strong running game, he should be able to win. That's the type of QB those guys are. As far as the rest of the Chiefs' QBs, they Chiefs are deeper with Quinn and Stanzi than they've been in a long time. I realize that's not saying much.

On whether or not the Chiefs should beef up on DBs just because Peyton Manning is in the AFC: I don't know they need to bring in an extra CB just for two games a year. Flowers is one of the better CBs in the league. The Chiefs seem to like Routt. We'll see how he works out.

On whether the Chiefs will take a quarterback in the 2012 NFL Draft: It's possible. Since they have no pressing needs other than NT, they have the flexibility to take a guy if one is there that they'd like. Makes a lot of sense to me. Cassel is still trying to establish himself. If he doesn't get that done this year, the Chiefs are going to need a new starting QB. Quinn is on a one-year contract. So it wouldn't surprise me. It's not Pioli's style to trade the farm for anyone, so they won't be making any bold moves like Washington made trading up to get RG3 (rookie black "shimmy and move, shuck and jive and then throw the ball quarterback" who's nickname is an idiotic RG3). That's why I think it makes sense that this is the year they draft a QB. If Cassel fails this year, you have a guy on hand to replace him. If Cassel turns out to be the guy, then you've got a QB you can trade. - Kansas City News note: Cassel will NOT be the guy...EVER.

On the Chiefs "ghetto fabulous" and not so bright wide receiver Dwayne Bowe: No, I think they'll keep him. They need him. Imagine what their receiving group looks like without him. Hard to say whether they can get a long-term deal done but I would think a holdout is possible.

On what the new offensive coordinator Brian Daboll will bring to the Chiefs in 2012: The Chiefs will probably do a lot of different things. But it will be based on the running game. In their perfect world, I think they'd like to give it to Hillis and to Charles 20 times a game.

On how much cap room the Chiefs have and what they will do with it in 2012: Yes, about $15 million as of now. They'll need about $6-8 million of cap space for rookies, in my estimation. So they have some room left. But you bring up a good point: They will save some of it to try to re-sign Albert, Dorsey and, if he plays on the one-year contract, Bowe. That's something Pioli likes to do.

On what the Chiefs plans are for star offensive lineman Ryan Lilja: Yes, I think he will be a starter this year. Let's see what happens in the draft but my guess is Lilja starts this year. They seem to be happy with where the line is right now with Albert and Winston and T, Lilja and Asamoah at G and Hudson at C. They do need some backups, though.

On the Chiefs beefed up receiving crew - is it a waste of roster space and cap dollars? Not at all. They'll throw the ball. If they don't get some big pass plays, they won't score enough points. But this thing will be built around defense and the running game. They won't be asking Cassel to win a lot of games for them. They will ask him to lose none.

Is Routt as good as Carr? Judging from the contracts they got, no. Carr got $10 million a year, Routt about $6.
Losing Carr gives a fragile feel to KC's defense, in my opinion. But that doesn't mean Routt can't be good enough to help the Chiefs win.

Crennel vs. Haley: Haley did some good things but he was a bad fit with Pioli and his volatility wasn't good for the Chiefs. Crennel is about the most stable coach there is and I think that reliability will be exactly what the Chiefs need right now.

On drafting Fletcher Cox in the 2012 NFL Draft: Dorsey's contract is up after this year and Jackson will carry a huge number but it;s not unsustainable. Salary cap should rise significantly next year. No position would be a huge surprise to me for the Chiefs at this point. They have few pressing needs, so they could go in a lot of directions, including DE.

On the chances of Tebow landing in Kansas City, maybe just to sell tickets: No. You don't make trades to sell tickets. That's always a mistake. You make trades to win games and I don't see how Tebow helps them do that. Besides, the Broncos wouldn't send him here in a million years. - Kansas City News Note: Absolutely not, we don't want "God Boy" in here anyway.

On the Chiefs chances in the AFC West in 2012: Look at this division. Mediocre teams won it the last two years. With Manning in Denver, it looks like it will be improved next year but still, winnable to the team that makes the most improvements. Right now, the Chiefs might be winning that race, even including Manning to Denver.

The Kansas City Chiefs - Reports on Chiefs and AFC West

This was a great write up on The Kansas City Chiefs and their 2012 roster moves so far. They didn't say too much about Winston but he was a great addition to the O line.