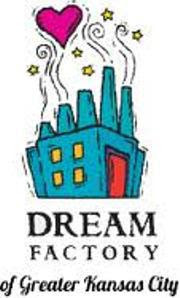 One of Kansas City's purest and most respected charity groups, Larry Moore's "The Dream Factory" will hold it's annual Gala at Starlight Theatre on April 20th, 2012. The Dream Factory is a volunteer driven charity that works to make dreams come true for children who have been diagnosed with life threatening illness and disabilities. Each year, several of these children are given the chance to live out their "dream", and the Dream Factory does it's best to make those dreams happen for the child.

This year's 2012 Gala at Starlight Theatre will feature a casual cocktail hour, followed by a delectable sit down dinner that will feature a film showing all of the dreams that came true in 2011 for the children. The dinner will be followed by our famous live auction and a guest appearance by KMBC-TV's Larry Moore. The delightful evening will be topped off with entertainment straight from Los Angeles, California in the form of The Dave Stephens Swing Orchestra, provided by Adam Blue Productions. Dave Stephens was featured in last year's lighting of the Plaza Lights performing "Zat You Santa Clause" and has been a jazz legend for over 2 decades. Guaranteed to get you out on the dance floor, the Dream Factory Gala 2012 will be a magical and rewarding night that will benefit many children who could use a "dream".

Tickets are $100 per person and are available at the Dream Factory website at www.kcdream.org Sponsorship packages are also available for larger groups and companies that wish to donate. The Dream Factory Gala is a Kansas City charity event that you will not want to miss! A beautiful night out under the stars at Starlight Theatre, a great dinner, superstar entertainment by Dave Stephens and all for a great cause. We will see you there!

The Dream Factory Gala Event 2012 at Starlight Theatre will support the goals of this great Kansas City charity which include:
You do not have to sign up to comment! If you have any trouble publishing your comment, try hitting the "Preview" button to publish from there. Thanks you from Kansas City News!
at 12:41 PM

The Dream Factory Gala is going to be one of the best ever this year! Be sure and get your tickets because they are selling fast.