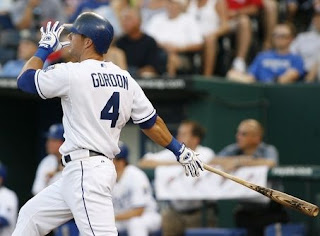 Alex Gordon has been named the official spokesperson for the 2012 MLB All-Star FanFest, which will begin on Friday, July 6th. Gordon’s spokesperson role includes making personal appearances at many of the events being held from July 6 through July 10.
With the Royals hosting the 2012 MLB All-Star game, it is no surprise that Gordon got the spokesperson nominee. He is coming off the best season of his career in which he not only put up great offensive numbers, but significantly improved his defense in the outfield and earned a gold glove award.
Unfortunately, Gordon couldn’t capitalize on the momentum of being named official spokesperson in tonight’s game against the Tigers. Gordon made a spectacular catch in the outfield, but struck out with the bases loaded in the bottom of the ninth. The Royals lost to the Tigers, 3-2, and fell to 3-7 for the season.
Kansas City News, official kc news site with breaking stories on The Kansas City Royals, Chiefs, charity events, the 2012 MLB All Star Game, weather, sports, MU, KU, ufo sightings, dui checkpoints, Kansas City neighborhoods, nightlife, concerts, the Sprint Center, the Power and Light District and current Kansas City news articles.
at 8:00 AM

I was playing MLB The Show and my team was the Royals and they TRADED Alex Gordon in the middle of the season? I was like "what the hell"?