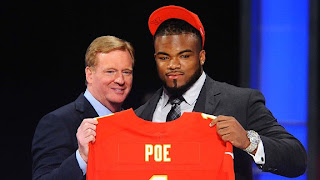 We've got our own Pot Roast! Hopefully the big fat man in the middle will force the opposition to run to the outside, into the waiting jaws of Hali or Johnson. For those not familiar, "Pot Roast" is the big fat guy on the Ravens that stops up the run, and very effectively.