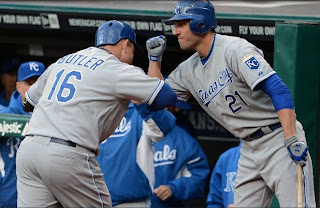 The Royals relied on the long ball last night, and Kansas City’s big three delivered. Billy Butler started off the offensive barrage with a two run blast in the first, and later added a solo shot in the ninth. Eric Hosmer’s two-run home run in the fifth made it 4-0, while Alex Gordon belted a three run home run in the ninth to ensure the streak was over.

There is no way to sugar coat this win – things were getting beyond desperate for Kansas City and the Royals needed to get the monkey of their backs. Not only did the team pick up a much-needed win, but Butler, Gordon and Hosmer all should get a good deal of confidence after great days at the plate. Luke Hochevar also pitched very well, giving Royals fans hope that he can produce the way he did after the All-Star break last season.

Kansas City wraps up its series with Cleveland today before traveling to Minnesota to begin a three game series with the Twins. Luis Mendoza (0-2) will start for the Royals, while Josh Tomlin (1-1) will get the nod for the Indians.