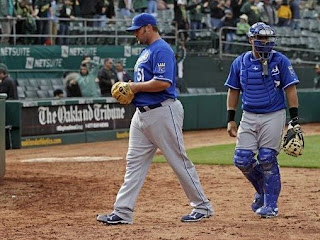 There are “tough” ways to lose a baseball game, and then there is the manner in which the Royals dropped last night’s extra-inning affair to the A’s. After taking the lead in the top of the 12th off of a Billy Butler double, reliever Jonathan Broxton allowed two runs and Oakland had a walk-off victory. It was how Broxton gave up the last run that has Kansas City fans fuming.

After former Royal Coco Crisp tied the game in the bottom of the ninth with an RBI grounder, Broxton’s control issues began. He hit Yoenis Cespedes on the first pitch of the at-bat to load the bases, then beamed Jonny Gomes on the first pitch of his at-bat to give Oakland the win. It was only the third time the A’s have won a game on a hit-by-pitch in the club’s history.

Broxton’s meltdown wasted some clutch hitting by two of Kansas City’s stars. Billy Butler and Alex Gordon both hit home runs and were responsible for all four of the Royals’ runs. The Royals had chances to add to their total, including a bases-loaded situation in the 5th, but were unable to capitalize.

The Royals’ return home tomorrow with a 3-3 record, and Kansas City can’t help but feel like it missed a golden opportunity to win its first two series of the year. There are some positive signs that should give fans hope – Kansas City’s starting pitching has been fantastic, and the Royals’ main offensive weapons are starting to find their groove. The Royals have a very easy April schedule, and there is no reason to doubt that Kansas City can emerge from the first month of the season with a winning record.