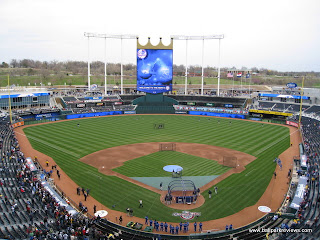 In honor of Earth Day, which took place on Sunday, the Royals have announced a new partnership with Kansas City Power and Light to install a new solar array at Kauffman stadium to produce solar energy. This new feature, part of the MLB Greening Program, will be the largest in-stadium solar array in Major League Baseball. Kansas City Power and Light installed a 28.8 kilowatt solar array on the roof of Kauffman Stadium, which will produce 36,000 kWh of renewable energy each year.

This addition is the first step in a long-term partnership between the Royals and KCPL to maximize renewable energy resources at Kauffman Stadium.
While Kansas City’s solar array will be the biggest in the league, they are not the only MLB team to add panels to their stadium. The Cardinals added solar panels to Busch Stadium this year, and other teams have made renovations to their ballparks in an effort to go green.

The Royals, currently in the middle of a league worst 10 game losing streak, will wrap up its series with Toronto today at 7:10 p.m.