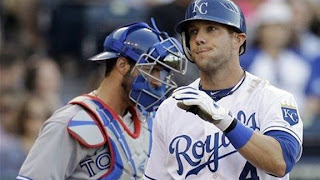 After starting the season with a lot of promise, the Royals have hit rock bottom. Kansas City lost its 10th straight game today, falling 5-3 to Toronto. With the loss, Kansas City fell to 3-12 on the season.

Out of all the losses during the losing streak, today's game might have been the best summary as to why Kansas City is off to a terrible start. The offense couldn't generate runs. Danny Duffy threw good pitches, but got rocked in the 5th inning and took his second loss of the season. Kansas City allowed Brett Lawrie to steal home. The Royals went a paltry 1 for 10 with runners in scoring position. The team got two runners on in the bottom of the ninth with only one out, and Bryan Pena hit into a game ending double play. The list goes on and on, but the point remains - this team is playing terrible baseball right now. Kansas City is hosting the 2012 All-Star game, which has allowed Kansas City to receive more regional and national attention than normal. Unfortunately, the team has only made its negative stigma worse this season.

Kansas City will try to salvage a win in the last game of the series tomorrow, which takes place at 7:10 p.m. Bruce Chen (0-1) will get the start for the Royals, while Brandon Morrow (0-1) will start for Toronto. The Royals will start a series with the Indians in Cleveland on Tuesday.