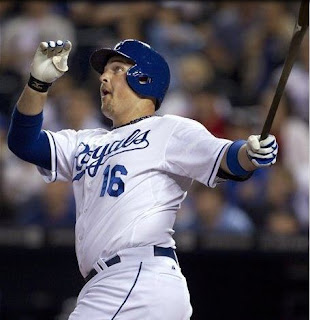 On a day in which Texas’ Josh Hamilton made headlines by hitting four home runs in one game, Billy Butler decided to grab a bit of the spotlight as well. Butler hit a three-run homerun in the eighth inning to propel Kansas City to a 6-4 victory over Boston. The win improved the Royals’ record to 10-19 on the season.

It appeared that Kansas City was on its way towards another frustrating loss. Despite giving up just three runs, Danny Duffy struggled and lasted 4 1/3 innings. Kansas City’s offense had a big third inning, but had been dormant since. The game was in doubt until Daniel Bard walked both Jarrod Dyson and Alex Gordon in the eighth. That would be the end for Bard, who struggled with his control all night and even had two balks. Boston’s Matt Albers relieved Bard, and three pitches later, Butler crushed a pitch to give Kansas City a lead it would not relinquish.

While Butler’s homer will get all of the headlines, several other Royals had key contributions to the win. Chris Getz and Humberto Quintero both came up with big hits in the second inning to drive in some runs. Getz has significantly improved his performance at the plate this season, and has been a pleasant surprise for a Royals team that is struggling to consistently score. Kansas City also got quality pitching from Kelvin Herrera, Jose Mijares and Jonathan Broxton after Duffy left the game. With the Royals’ starting pitching struggling lately, it is encouraging to see the bullpen step up.

The Royals’ face the Red Sox again tonight at 7:10 p.m. A victory would give the Royals a winning record in its AL East home stand against New York and Boston. Bruce Chen (0-4) will start for the Royals, while Jon Lester (1-2) will take the mound for the Red Sox.