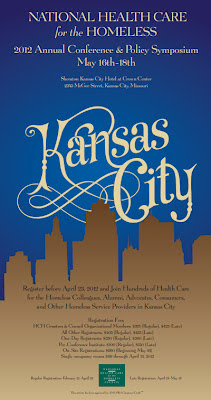 On Thursday evening several hundred charitable souls joined forces in Kansas City in the local of Washington Park across the street from Crown Center at Pershing and Grand.  The charity organization, National Health Care for the Homeless, held a fun and upbeat rally in the park that included inspiring speeches, music and dancing, and marching "homeless" people holding up signs for all to see.  The event was held to raise awareness for the homeless in the United States and the fact that most homeless people do not have any form of healthcare.  This week their focus was on Kansas City.

The mission statement of the National Health Care for the Homeless claims that the road to being homeless often starts with a health problem that leads to unemployment, lack of physical ability, and eventually debt and loss of residence or "homelessness". The charity event held in Kansas City was to raise awareness in Kansas City about the causes and consequences of homelessness in the city and the need to work together to end homelessness.  The NHCH believes that this effort must begin with Universal health care, or access to health care.  This is not to be confused with Obamacare, which scares most Americans due to it's ties to Socialism.  The National Health Care for the Homeless are simply trying to give the homeless of America a chance to acquire simple health care.

The NHCH was in Kansas City on Wednesday night as well, holding a charity gala, produced in part by Adam Blue Productions, at the Sheraton Crown Center (formerly The Hyatt Regency) where they had a beautiful reception, dancing and even a little karaoke.

More information on the charity organization from their website:

Integration of service and advocacy is the hallmark of Health Care for the Homeless. The principles of the National Health Care for the Homeless Council encourage homeless service providers and their clients to engage in advocacy to prevent and end homelessness. We strive to accomplish this goal by educating public policy makers, mainstream health care providers, and the general public about the causes and consequences of homelessness in the United States, and by working at national, state, and local levels to ensure:
Kansas City News, official kc news site with breaking stories on The Kansas City Royals, Chiefs, charity events, the 2012 MLB All Star Game, weather, sports, MU, KU, ufo sightings, dui checkpoints, Kansas City neighborhoods, nightlife, concerts, the Sprint Center, the Power and Light District and current Kansas City news articles.
at 1:20 AM