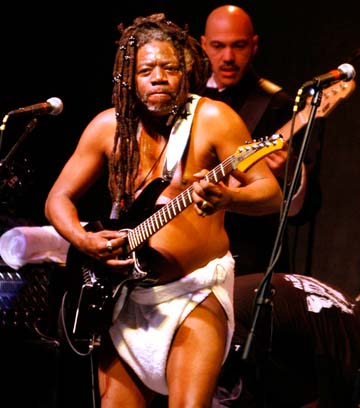 George Clinton and the P-Funk All Stars will return to Kansas City and perform at the Crossroads on Friday May 18th, 2012. - Kansas City News

At the ripe old age of 70 years old, George Clinton is still doing it - and doing it FUNKY.  The last time that George was here they hired Sound Check to do the sound at the City Market and George's microphone didn't work for the entire first two songs.  As the roadies and crew scrambled around the stage trying to get George Clinton's microphone turned on, he realized what had happened and he was not happy.  George spent the entire first two songs slapping his microphone into his hand, until finally, the geniuses at Sound Check figured out how to turn George Clinton's microphone on.  George was still a little upset and so for the next song he chanted the same line over and over through the whole song, about an 8 minute song.  We couldn't understand what George Clinton was up there chanting, but he was obviously getting back at the sound crew for messing up his first two songs.

George Clinton and the P-Funk All Stars will be at the Crossroads tonight, and hopefully they hired a better sound crew this year and they will get George's microphone turned on. You can always tell how popular a band is by the venue that they perform at, and well, this one speaks for itself.  Whereas in earlier years George Clinton and the P-Funk would have done their show at Sandstone, or in the old days at Kemper Arena, now they are playing at the Crossroads  with The Good Foot, a local Kansas City band as the opening act.  George Clinton inspired an entire generation of artists and musicians with the most pure form of funk music bar James Brown and Rufus.  Although the band never really generated any major hit songs, their outrageous stage show, and overall energy has kept at least a few fans coming out to the shows even after almost 40 years in the business.  George Clinton and the P-Funk definitely inspired local Kansas City bands The Groove Agency and Karma (formerly Simplexity) as well as many other National acts.

George Clinton and the P-Funk All Stars usually have around 15 people up on stage, some of them playing instruments, some of them just up there to look crazy.  There's usually a large woman with purple hair, a guitar player who wears nothing but a diaper, and it's hard to tell who (if anyone) is actually playing live or if they are performing to a recorded track of some sort.  With all of those people crammed on the stage you can't really hear what any one member is doing, so it all just sort of goes into this chaotic "jam session" that is the signature of the band.  They will most likely do an encore with their famous song "Atomic Dog", made famous by George Clinton in the 80's, and while it was recorded long ago, the song quality and bass frequencies still hold up today when they play it in large dance clubs and football stadiums, etc.

Catch one of the all time greats tonight at the Crossroads as George Clinton and the P-Funk get funkdafied in yo face.

George Clinton in Kansas City at the Crossroads, always a good show, it would have been better to see a more dedicated FUNK band opening the show, like Karma or The KC All Stars but still a good show. George Clinton is 70 years old, that is amazing people, amazing.