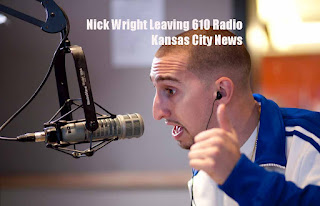 Nick Wright leaving 610 for Houston's KILT 610 will no doubt have a few Kansas City Royals and Chiefs fans upset.  "What's Right with Wright" on 610 KCSP AM was absolutely one of the most listened to Kansas City sports radio programs on the air.  Nick Wright will do his final show on May 22nd, 2012 and a replacement has not yet been named.

Upon Nick Wright's upcoming departure from 610 AM he commented that [the move is] "not a bad thing, 610 has treated me very well" and that "I'll be here a little longer and will be able to give details on where I'm going down the road.  But it's all good things."

Some speculated at first that Nick Wright might be leaving us to go National, after filling in a few times on Fox Sports Radio, it turns out that he is just moving to another AM radio station based in Houston, Texas in KILT 610 AM.  Another thought was that Nick may be joining forces with Kevin Kietzman on 810 Sports and remain in Kansas City on another program.  Although Kevin Kietzman's "Between the Lines" on 810 Sports Radio remained the most popular sports radio show by far, Nick Wright had many fans in the Kansas City sports arena.

Nick Wright will be replacing Marc Vandermeer and teaming up with John Lopez on the KILT 610 AM morning show.

Upon Nick Wright's departure from 610 AM, KCSP program director Ryan Maguire commented that "Certainly, we wish Nick the very best and we certainly wish that we could have retained him, we had every intention of retaining him and were negotiating in good faith up until the time his contract expired, but he decided he wanted to take his talents elsewhere. Turnover is a part of any business, including radio, but turnover is only a bad thing if you don't use it as an opportunity to get better, which is exactly what we plan on doing, as is the case any time we make a change. This is not the first time we've had a very talented host we were very high on leave. Nick is not first to have stars in his eyes and big city dreams. We would absolutely welcome him back and no bridges were burned".

And at Nick Wright's new home Houston's Sport Radio 610 Morning Show program director Gavin Spittle said that "I appreciate you giving him a fresh chance. He's fun, he is super excited to be here and he has done some great things in Kansas City. His numbers are terrific. He was going against a heritage sports station and they were neck and neck. He's top 5 in both men 25-54 and men 18-49. He's a great guy who is excited to be a part of the community and hopefully people give him a chance."

Nick Wright is off to the big time! Good luck Nick, we will miss you.

I wouldn't exactly call Wright's move a move to the "Big Time" - as he only made a lateral move to another AM station in Houston - 610 AM to be exact. Although he is most likely making a little more money, it is certain that his reason for leaving is due to the fact that our sports teams in Kansas City are so terrible right now that it is just downright depressing. Who wants to report on that? Another thing about our sports teams in KC is that all the fans can do is talk, talk on the radio, talk on blogsites, talk to each other at bars. The bottom line is that the owners of the Royals and the Chiefs are simply pocketing money and profits, knowing that the fans will still show up to the games no matter how bad the teams are. The Royals maintain a steady 25,000 + attendance at nearly every home game! The Chiefs experience a SLIGHT drop off in ticket sales towards the end of each season if they are eliminated from the playoffs, but fans still pack the stadium every home game Sunday.

As long as the fans in Kansas City continue to go the stadiums, buy $9 beers, and pay $27 to park, why should the owners care how good the teams are? What are the repercussions? A bunch of middle aged dorks making nasty comments on message boards? Oooh, that should scare them into doing something about our losing, miserable teams. NOT

Nick Wright left because the Kansas City teams are both a joke and there is no change on the horizon.

Just watched the "Baseball" series on PBS by Ken Burns. They don't mention the Royals AT ALL. It is a 12 part (3 hours per episode) series on baseball and they don't even mention the Royals, period. Not once. My God, I don't think that our team even exists outside of Kansas City. I was appalled that the Ken Burns series didn't even give the Royals a nod for the good years from 1979 - 1985. They conveniently skip from 1978 to 1986, and the only thing that the series mentioned about 1985 was Pete Rose getting caught gambling. They mentioned EVERY other team in the MLB yet NOT ONE WORD about the Royals. Wow, man, Wow.

shame about nick wright, he was one of my favorites. good luck in houston man, at least their team made the playoffs!

Just like the Royals trading away their good players, the sports radio and sports media can only follow suit. If the leaders in this sports community don't care, why should the sports media? Or the fans?