Royals Back In Contention With Win Over Rangers - Kansas City News 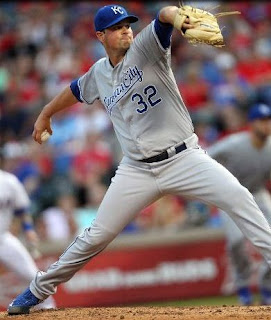 After an embarrassing 12 game losing streak, it looked like the Royals were headed towards another disappointing season. However, Kansas City has won four games in a row and suddenly finds itself back in contention in the AL Central. Last night, the Royals beat the Texas Rangers 7-4, improving their record to 15-20.

The story of last night’s game was Vin Mazzaro, who made his season debut against the best offense in the American League. Mazzaro was called up to replace Danny Duffy, who was recently lost for the season due to an elbow injury. The young right hander gave up three runs over five innings, keeping the Rangers in check while the Royals offense got big hits from Billy Butler, Mike Moustakas and Bryan Pena to take the lead. Kansas City also got a strong pitching performance from reliever Tim Collins, who struck out five of the six batters he faced in two innings of work.

The question now is can Kansas City keep its momentum going? The loss of Duffy is a huge blow to the starting pitching rotation, and the Royals have some tough series coming up. The good news is the Royals have a puncher’s chance to reach the top of the AL Central standings, something that was unimaginable a few weeks ago.

Kansas City will look to keep its winning streak alive tonight, when they begin a three game series with Baltimore. Felipe Paulino (1-1) will start for the Royals, while Tommy Hunter (2-2) will get the start for the Orioles.