Royals Get Hammered By Tigers As Hochevar Struggles 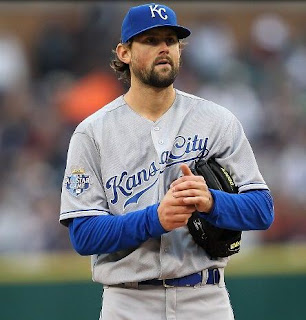 The Royals entered last night’s game with a chance to turn their season around. They were facing a struggling Detroit Tigers team and a pitcher who had been lit up all season long. So naturally, Kansas City got hammered by Detroit, 9-3. The Royals are now 0-4 against the Tigers this season, and the loss dropped Kansas City to 6-16 for the season and a half game out of last place in the AL Central.

If there is one thing MLB teams can take away from this game, it is that a game against the Royals is the best cure to end any sort of skid. Rick Porcello entered the game with a 15.26 ERA in his last two outings, and held the Royals’ offense in check all game. The Tigers as a team had dropped 10 of its last 12 games and recently lost Delmon Young to a suspension, but Detroit managed to come out hot and cruised to another victory over Kansas City.

Royals’ fans have to be frustrated with Luke Hochevar and his Dr. Jekyll/Mr. Hyde routine. Hochevar has now made a career out of either pitching very well or getting hammered, and this season has been no different. Hochevar has looked like an All-Star in his two wins, and looked like a minor leaguer in his two losses. He gave up five runs in the first inning alone, and by the time he was pulled, Detroit had put nine up on the board against the former first overall draft pick. Hochevar certainly has the potential to be a top pitcher, but he has to find some consistency.

The lone bright spot for Kansas City’s offense was a two RBI game from Alex Gordon and a triple from Jarrod Dyson. Don’t expect the Royals’ offense to fair much better tonight, as Justin Verlander will be taking the mound for Detroit. He will face the Royals’ Jonathan Sanchez, who has struggled this season. The game begins today at 12:05 p.m.

Poor Luke Hochevar, he is a victim of his surroundings. If the Royals aren't producing, then there must be some blame to be put on management. All of the players can't suck, can they? It's just a stupid round white ball and a bat, can't be THAT big of a deal right? I'm just saying that I bet the overall atmosphere and attitude of say, The St. Louis Cardinals, is better than the atmosphere and attitude here in Kansas City when it comes to the Royal's everyday operations. Something must be missing, otherwise why would a team that is just over 200 miles down I-70 be able to content every year, and we stay on the bottom of the pile? St. Louis doesn't have any more money that Kansas City does. There's something stinky in Sluggerrrr villa. Just sayin'. Nice post though.