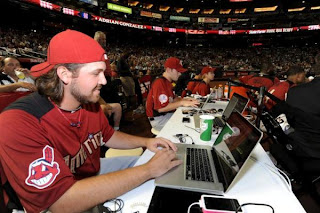 The 2012 MLB All Star game is being billed as the “most social event in baseball history.” The league has recently announced that several new social media platforms will be introduced to the game, making it more social than ever before. One key introduction will be the usage of computer stations at each clubhouse, which will allow teams to interact on social media when they are not in the game.

This year, MLB will use this platform in both the Home Run Derby and the actual All Star game, and if past stats are any indication, this truly could be the most social event in baseball history, if not sports history.

This new development is similar to what the MLB did last year during the 2011 Home Run Derby. Several computers were set up, which allowed players to go online and use social media platforms while the Derby was taking place. There was some incentive for players to tweet during the Home Run Derby as well: players who tweeted during the competition saw their follower list increase by 17% in the hours following the event, and the home run derby generated what was at the time the 7th-highest tweet per second mark in Twitter history.

The TV networks are in on the social aspect as well, as ESPN and FOX will both heavily incorporate social media into their television broadcasts of the events, creating a fully integrated social TV experience for fans. With several celebrities on hand, this could also be a way to entice non-baseball fans as well.