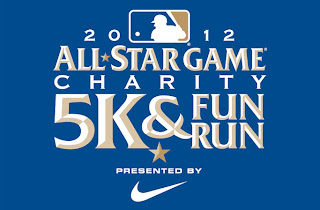 The All-Star Game Charity 5K and Fun Run has officially released its schedule of events. The 5K race will start at 7:30, while the one mile fun run will start thirty minutes later. Registration now includes an early price of $25 (adult) and $20 (under-13) for the 5K and $20 (adult) and $15 (under-13) for the Fun Run. Space is limited so participants are encouraged to sign up early. Registration and event information can be found here.

All proceeds from the event will be donated to the Prostate Cancer Foundation, Stand Up To Cancer and Susan G. Komen for the Cure. Participants will run and walk on an All-Star themed course which will feature appearances by MLB legends, mascots and celebrity guests.

Award-winning actress and singer Kristin Chenoweth has confirmed that she will be attending the 2012 MLB All-Star Game Fun Run, joining former Royals All-Stars George Brett and Mike Sweeney. Chenoweth, who was won both a Tony and Emmy award in her career, is currently the star of ABC’s GCB and serves as a Stand Up to Cancer ambassador.