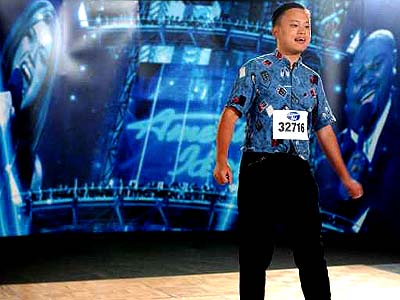 Oh wow, there's going to be some crazies showing up for this audition. With all of the idiots who keep creating the American Idol type shows, they will have a lot of loonies for sure.

This sounds great, I'm going to talk my daughter into trying out, she has a lovely voice and she has sung the National Anthem at our church before.

I wonder if anyone is going to make up their own words to the National Anthem for this? That would be funny.

yeah, if it's one thing Chiefs fans have to have it's a sense of humor, that team is the dumpster baby of the NFL

The Chiefs have had some major screw ups doing the National Anthem in the past, remember the Eli Young experience? This contest should be very interesting, however, as the country bumpkins will be crawling out of the woodwork.

We're trying to convince our son, who just got married, to try out for this. I think that he has a beautiful voice and could win the Chiefs National Anthem contest in Kansas City. Look for him in the semifinals, he's the 6'4 blonde with equally big vocal chords!

That's funny, we are trying to get our 7 year old daughter to try out to sing the chiefs national anthem. Maybe we will see you at the semifinals, or hopefully the finals in july.

We submitted our video for the Kansas City Chiefs National Anthem contest last week and haven't heard anything back yet. Maybe it wasn't our son's best work?? Does anyone know when the Chiefs staff or contest judges are supposed to get back to us with any news?

And the winner of the Kansas City Chiefs national anthem contest is William Hung!