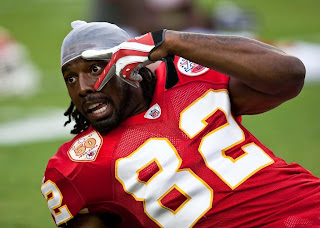 Kansas City started its mandatory three-day minicamp yesterday with one glaring absence: All-Pro wide receiver Dwayne Bowe. The Chiefs’ wide out has yet to sign his franchise tender, which means he is currently not under contract and is not required to participate in these drills.

Bowe is coming off his second consecutive productive season, catching 81 passes last year for 1,159 yards and five touchdowns. Bowe was able to produce despite injuries and inconsistency in the Chiefs’ QB rotation, and he is obviously a huge part of Kansas City’s offense.

There are several troubling factors to Bowe’s current holdout. First, there is no guarantee of when the WR will join his teammates. Bowe could be on the practice field when training camp starts in a little over a month or the day before the Chiefs first game – there is no current time table. Also, Kansas City is installing a new offense under new offensive coordinator Brian Daboll, which many Chiefs players have deemed as being somewhat complex. Hopefully Bowe will be able to join the team soon and have enough time to pick up the new offense. Kansas City cannot afford a repeat of last year, when the Chiefs had an absolutely dreadful start to the regular season, and needs all its players on the same page.

One silver lining of Bowe’s absence is that second year Jonathan Baldwin has been able to receive more reps. Baldwin, last year’s first round draft pick, missed last offseason due to the NFL lock out, and has reportedly made some big strides in training camp.

Several other Kansas City players also missed the minicamp due to injuries. Eric Berry, Jamaal Charles and Tony Moeaki all sat out due while they recover from injuries sustained last season, while rookie WR Devon Wylie missed practice due to an injured hamstring.

We knew that Bowe would do some kind of hold out, but when you think about it, what is he going to gain from it anyway? This kid has never been the sharpest tool in the shed. How about just catch the ball Bowe, let's start with that for now.