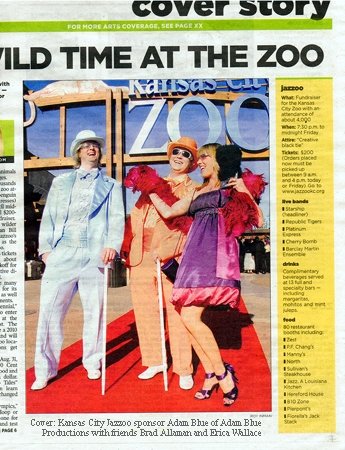 Jazzoo 2012 is going to be a great event! Hopefully a lot of people come out to support the animals at The Kansas City Zoo. This is a very good cause and well worth the ticket price.

Can't wait for 5 o'clock so I can get out of here and start getting ready for Jazzoo 2012
I'm ready for a ZOO-garita :)

Directions to the Kansas City Zoo for Jazzoo 2012 are:

Coming from Overland Park / Leawood
Take 435 East to 71 North (the ghetto highway) then exit on 63rd Street and take a right. Go through Swope Parkway and you will run straight into the Zoo. There are plenty of signs.

Coming from the Northland
Take 435 South to 63rd Street Exit then go West and follow signs for the Zoo.

Directions to the Kansas City Zoo without using the highway:
From wherever you are in the city, just take Gregory (basically 70th Street) East through the ghetto and then after you cross over Swope Parkway you will start to see signs for the Zoo.

Have fun at Jazzoo 2012 and hopefully these directions to the Kansas City Zoo helped you on your way!

Only 45 minutes to go and I'm outta here! Jazzoo here we come, with cat tails on!

This is going to be one of the best Jazzoo events ever! Thanks for the directions to the Zoo, this is our first time since we moved to Kansas City.

Jazzoo was a pretty good event this year, there could have been better bands though. Sounds like they booked the bands at Jazzoo through some old washed up booking agent in Kansas City.