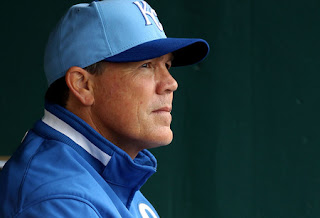 Royals Manager Ned Yost and Head Athletic Trainer Nick Kennedy have been named members of the AL coaching staff for the upcoming 2012 MLB All Star game, July 10 at Kauffman Stadium. The two will join AL manager Ron Washington’s staff, who will be coaching his second consecutive All Star game. Oakland Manager Bob Melvin will join Yost and Washington. Washington has told the media that he picked Yost due to the impressive job he has done with a young Kansas City team this season.

The National League will be managed by Tony La Russa, who lead the St. Louis Cardinals to a world series championship last year. La Russa’s staff also includes Ron Roenicke of the Milwaukee Brewers and Terry Collins of the New York Mets.

This will be Yost’s fifth All Star game appearance; he also was included on the staffs in the 1996, 1997, 2000 and 2005 games. This will be the first All Star appearance for Kennedy, who is now in his third season as the Royals’ head trainer. Kennedy will be joined by Lonnie Soloff of the Cleveland Indians.

Yost is the 10th Royals manager to serve on the AL staff. Dick Howser was manager in 1986 after the Royals won the 1985 World Series, and was a coach in 1982 and 1985. Other Royals coaches who participated include Bob Lemon, Jack McKeon, Whitey Herzog, Hal McRae, Bob Boone, Tony Muser, Tony Pena and Trey Hillman. Kennedy is the fourth Royals trainer to be included on an All Star game staff, joining Jim Dudley, Mickey Cobb and Nick Swartz.