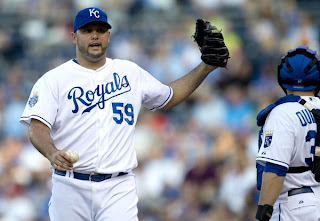 The Royals' pitching staff has already been hit hard by injuries this season, and it appears as if things are getting even worse. Kansas City has now placed Felipe Paulino on the 15 day disabled list.

Paulino has pitched incredibly well for the Royals in his brief stint in the rotation this year, compiling a 3-1 record and an impressive 1.67 ERA. Paulino has a strained groin, and joins a long list of Kansas City pitchers who have gotten hurt this season.

Kansas City has called up Nate Adcock from Triple A Omaha, who already has seen significant major league experience this season. The Royals will also move Luis Mendoza back into the rotation after his recent stint in the bullpen.