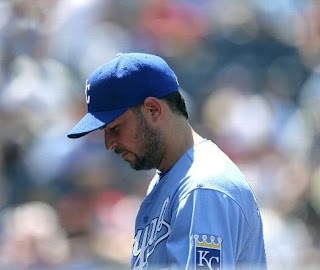 Just when the Royals had crawled back into contention and found themselves only a few games out of first place, disaster struck. Kansas City’s starting pitching was dreadful all weekend, and the Royals were swept by the St. Louis Cardinals.

The sweep highlights why Kansas City will once again have a sub .500 season – the Royals simply do not have capable starting pitching. Against St. Louis, the Royals gave up 41 hits and 30 runs over three games. The poor pitching performances wasted a great offensive output from the Royals on Sunday, when Mike Moustakas hit two home runs and both Jeff Francoeur and Billy Butler went yard as well.

Injuries have completely decimated the rotation, forcing the team to start players that really have no business pitching in the major leagues. At the moment, Bruce Chen is the team’s best pitcher who is not on the disabled list, and he is sporting a 4.81 ERA for the season. Chen is who he is, a decent option for a fourth of fifth starter, but he shouldn’t be the Royals best option at this point. Luke Hochevar has made it official that he is never coming close to living up to his first overall draft status as well, meaning that Kansas City is going to have to score a lot of runs night in and night out to have a shot. That is simply too much pressure on the offense, and it appears that it will likely be downhill from here for the rest of the season.

The Royals will try to get back on track tonight, when they start a three-game series with the Tampa Bay Rays. Hochevar (4-7) will start for the Royals, while Alex Cobb (3-3) will take the mound for the Rays. Game one is tonight at 7:10 p.m. at Kauffman Stadium.