Who Will Represent The Royals In The 2012 MLB All Star Game? 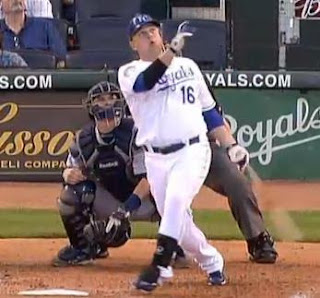 The 2012 MLB All Star Game is approaching, and online voting for MLB fans ends tonight at midnight. Royals fans will have to wait several days to find out which Kansas City player will be representing the team in the All Star Game, although there are two strong possibilities as to who will get the Royals’ All Star selection.

Billy Butler has made a strong case to be selected as Kansas City’s All Star. The 26-year-old slugger has hit for a .296 average this season, with 15 homers and 46 RBI. Not only has Butler been Kansas City’s most consistent offensive player, he has several clutch home runs that have helped the Royals win some close games. Without Butler’s performance at the plate, it is safe to say that Kansas City would not be sitting at 34-39 on the season and only a couple of games out of first. Despite another solid year, Butler may get passed over in favor of designated hitters like David Ortiz, and his position is loaded with players with similar, if not better, numbers.

Another possibility is Jonathan Broxton, who has slowly turned into one of the better closers in the American League this season. Broxton boasts a 1.52 ERA and 19 saves this season, and is another reason why the Royals are still in contention midway through the season. Due to the number of pitchers selected, Broxton has to be the favorite to grab Kansas City’s All Star spot.

Fresh off an impressive sweep of the Rays, the Royals will begin a series in Minnesota tomorrow against the Twins. Minnesota is one of the worst teams in baseball, and the Royals have a great opportunity to bring their record closer to .500 on the season.