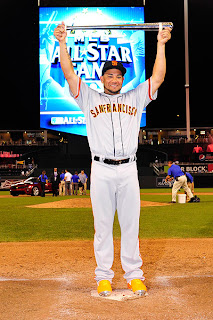 If you are a Kansas City Royals fan, you have probably gotten used to seeing talented players leave the team and find success elsewhere. Last night, we once again witnessed the same old story, as former Royal Melky Cabrera had a huge game and won MVP honors while leading the NL to a 8-0 victory over the AL.

Cabrera had a good year for the Royals last year, and has been on fire this season. This year, he has a .353 batting average, 44 RBI and a league-leading 119 hits. The player he was traded for, pitcher Jonathan Sanchez, is 1-5 with a 6.75 ERA. So far, it appears that once again, the Royals' front office was outdone, and Kansas City fans have to watch another all star-caliber player find greener pastures elsewhere.

The game itself wasn't much of a competition. Pablo Sandoval broke the game open with a three-run triple in the first inning, and the NL never looked back. Sandoval and Cabrera teamed up to supply the majority of the NL's offense, while pitcher Matt Cain was on his game - giving the San Francisco Giants a looming presence in the event.

The Royals will be back in action this Friday, July 13, when they start a home series with the Chicago White Sox. The game will mark the beginning of a ten game home stand for Kansas City, which also features series against the Seattle Mariners and Los Angeles Angels.