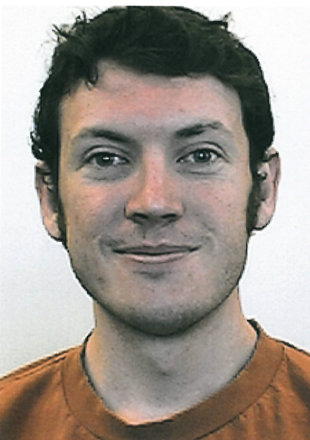 In the largest mass shooting in history, James Holmes allegedly killed 12 people and injured at least 50 others during the opening midnight showing of the new Batman movie "The Dark Knight Rises". Aurora, a small town just east of Denver, Colorado, was home to a medical student named James Holmes who had moved to Aurora to work on his PHD in neuroscience at the University of Colorado, just a few miles from the Century 16 movie theater where the mass shooting occurred.

According to movie goers who were in the theater during the shooting, James Holmes came to the Batman premier dressed in riot gear essentially, but did not stand out as several people attending the opening of The Dark Knight Rises were dressed in costume, Holmes then went into the theater and opened the emergency exit door, propped the door open so that he could go to his car parked outside and grab an AR-15 assault rifle, a shotgun and two handguns and return to the theater. James Holmes waited until about 20 minutes into the Batman movie before he threw exploding canisters of tear gas into the crowd. As some of the witnesses stated, at this point they thought that the exploding canisters might have been part of the "show" and they remained seated. That is when Holmes opened fire with his automatic weapon, pacing up and down the stairs shooting people in their seats. One witness said that there was no pause in his weapon fire and that he did not ever seem to reload, he just fired on the audience incessantly for over 2 minutes. James Holmes then moved his position to the exit door where he opened fire on people trying to flee the theater.

After a few minutes, James Holmes went outside to his car where he was apprehended by police. While police were arresting him Holmes claimed that he was "The Joker" and that they had better not search his apartment because it was booby trapped with explosives. This turned out to be true, as police are still trying to "disarm" James Holmes' apartment on the third floor of an apartment building that houses only medical students from the University of Colorado. According to authorities Holmes' front door was completely set up to explode upon entry, and luckily police decided to enter through the exterior windows with crane lifts.

James Holmes had recently dropped out of medical school in the spring of 2012 during his 2nd year at the university. Police contacted his parents and his mother told them that they "had the right person" but it is not yet known what else she may know about James Holmes' behavior at the time. Holmes has no prior arrest record, and no terrorist ties are suspected to be linked to the Batman shooting.

The new Batman movie "The Dark Knight Rises" reportedly has several "mass destruction" scenes, including explosions at public events including a football game. Watch the new Batman movie trailer on YouTube and you can easily see that the violence levels continue to rise with each new Batman movie, they have strayed completely away from the comedic relief tendencies of past Batman movies and have gone forward with this "Dark" series. The youth of today, particularly in the age group of James Holmes (age 24) have grown up watching such horrendous things on TV that they are completely desensitized to things that other generations would have considered "shocking". Television shows depicting tens or hundreds of people being shot or blown up with blood splattering everywhere can be found on almost any channel at any time during the day. It is clear that James Holmes was indeed a Batman enthusiast as he most likely stood in line for hours to purchase his ticket, and in the end claimed that he was "The Joker" as police took him away. There is a much bigger issue at hand here than just this one incident.

Local Kansas City news stations are all reporting on "what should we do to increase security at movie theaters" when they should cut to the real problem that there is simply too much violence in movies and television today and that these kids are just numb to it all.

You hit this one right on the head, this is a problem with our entire society. If this incident would have happened in the 1950s they would have pulled that movie off of the shelf so fast it would make your head spin. All of this dark crap and goth crap has got to go these kids are stupid and violent a terrible combination

James Holmes probably was involved in some sort of chat room or blog comment blowout. Those things can get really vicious! When people can hide behind anonymity on the internet then they really let the evil fly. You get to see what people really feel when they can express themselves through a nameless, faceless blog thread. People are good for the most part, and typically the only ones who lose it like James Holmes are spoiled little brats.

He witnessed 9/11 happen when he was 13 years old, grew up with the U.S. in constant war and saw his fellow citizens cheer as leaders from countries deemed our enemies were assassinated. He didn't need Batman movies to see violence.