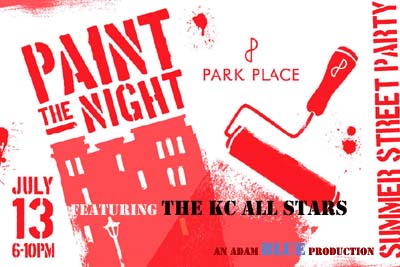 The City of Leawood, Kansas will come to life tonight as Park Place is hosting the 2012 "Paint the Night" concert featuring the winner's of KMBC-TV's "Best Band in Kansas City" award, The KC All Stars. The KC All Stars are headlining the concert and will take the stage around 9pm. This massive street festival will have over 5,000 people in attendance and will be one of the biggest outdoor concert events of the year.

The Park Place Concert Series, founded in part and produced by Adam Blue Productions is an annual outdoor large scale concert held at the all new Park Place shopping district in Leawood, Kansas located at 115th and Nall. The concert has grown in size every year as it attracts Leawood residents and Southern Overland Park residents alike.

The KC All Stars have created a massive following in the Kansas City, Leawood and Overland Park areas and they have won the "Best Band in Kansas City" award for three years in a row. Members of The KC All Stars attribute their success to hard work, attention to the fans, and the fact that the band is young, energetic and have the ability to perform hit songs from every generation from Motown, to 70's Funk, to the hits of the 80's, to 90's hip hop all the way up to today's modern hits. "Always give the crowd what they want" is the band's motto, and tonight at Park Place's "Paint the Night" concert in Leawood, that is just what they intend to do. The weather for the concert should be very tolerable compared to the weather that Kansas City has recently experienced, with temperatures in the mid to low 80's when The KC All Stars hit the stage around 9pm.