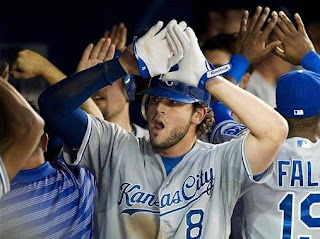 Mike Moustakas had a huge game, leading the Royals to an 11-3 rout over the Blue Jays. The win improved Kansas City’s record to 36-42 on the year, and the team is only 5.5 games out of first in the latest AL Central standings.

Entering the game, Moustakas was in the middle of his worst slump of the season, hitless in his last 14 at bats. After striking out in his first plate appearance, Moustakas belted a double to score Yuniesky Betancourt in the third. This must have been what got the monkey off Moustakas’ back, as he blasted a grand slam in the seventh to turn the contest into a route. Despite the prior slump, Moustakas is having a very strong season for the Royals, and the offensive barrage in yesterday’s game was just a glimpse of the young first baseman’s power.

While Moustakas grabbed the headlines with his grand slam, several other Royals had strong games as well. Salvador Perez hit a two run homer, and Betancourt and Alex Gordon also drove in runs. As a team, the Royals tallied 14 hits last night, a season high. Also, Kansas City got a good pitching performance from Everett Teaford, who threw seven strong innings against one of the best offenses in the major leagues to earn his first win of the season. Given the Royals' injury woes at pitcher, we will likely see Teaford get a shot to join the rotation on a permanent basis for the rest of the season.

The Royals will try to keep their hot bats going tonight against Toronto, as the Jays’ Brett Cecil (1-1, 6.06 ERA) has struggled this season. Vin Mazzaro (3-2) will start for Kansas City. The game will start at 6:07 p.m.