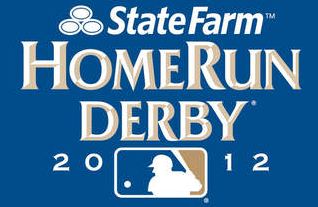 The 2012 MLB All Star festivities are in full swing, and tonight fans will get to watch their favorite sluggers battle it out in the annual State Farm Home Run Derby. The event will take place at 7:00 p.m. at Kauffman Stadium.

Each player will hit balls off of a practice pitcher of their choice. Contestants will get 10 outs per round, which is any swing that doesn't result in a home run. The top four homer hitters move on to the second round and the players with the two top combined totals for rounds one and two advancing to the finals.

Following last year’s format, the Derby will be a charity competition between the two leagues. Each team's captain has selected a charity, with $150,000 going to the winning team's charity and $100,000 going to the Boys & Girls Club of America. The losing team's charity will receive $25,000. All remaining charity money generated by the Home Run Derby will go to the BGCA. When a player gets to nine outs, a Gold Ball will be put in play. For each Gold Ball home run, State Farm and MLB will donate $18,000 to designated charities. State Farm will also donate an additional $3,000 for every non-Gold Ball home run hit throughout the Derby. Last year, the Derby raised $603,000 for charity.

This year’s event will also allow players and fans to interact with one another during the derby. Social media stations have been set up for both teams to use, and players will be using Twitter to share their personal thoughts, photos and videos from the competition.

Royals fans will have the opportunity to see Beltran play once again in Kansas City. The former Royal spent his first six and a half seasons in the Major Leagues playing his home games at Kauffman Stadium, so tonight should be a homecoming of sorts for the slugger.