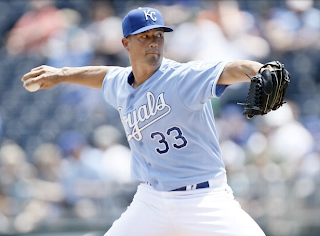 During the offseason, the Royals made one of the worst trades in recent baseball history. The team sent Melky Cabrera packing, trading the future 2012 All Star game MVP to the Giants for pitcher Jonathan Sanchez. This season, Cabrera has been one of the better hitters in baseball, while Sanchez was a complete disaster - a 7.76 ERA in 12 starts, one win and six losses. The trade could very well spell the end for Dayton Moore in Kansas City. The Royals finally cut ties with Sanchez, trading him on Friday for Jeremy Guthrie.

Unfortunately for Kansas City, Guthrie really hasn't been any better than Sanchez this season, and his debut today mirrored his results from earlier this year. Guthrie lasted only five innings, giving up five runs in a 7-5 loss to the Twins and falling to 3-10 on the season with a 6.49 ERA. Hopefully a change of scenery pays off for Guthrie, but his career as a Royal currently got off to a rocky start.

Starting pitching has been a huge problem for the team since the All Star break. On the Royals 10 game homestand, the team's rotation had a 7.38 ERA, a big reason why Kansas City is 3-7 despite facing an easy schedule. Injuries have really decimated this group, and its hard to see the team ever getting back in contention now.

The lone bright spot for the Royals was Billy Butler, who belted his 19th homer of the season. Alex Gordon and Mike Moustakas have continued to hit and get on base as well, and the team's young core has steadily produced runs since the All Star break. We'll see if the Royals pitching can improve enough to support the team's offense.

Another bone headed trade away by The Kansas City Royals, no big surprise there. Let's hope that they can turn things around next year with some fresh players from our so called "awesome farm team" that we supposedly have.