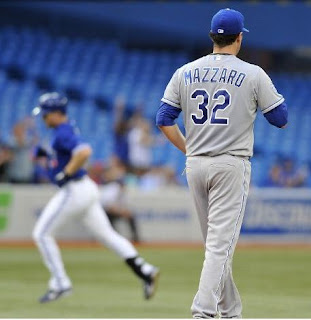 After winning four games in a row to pull four games under .500, the Royals have entered a bit of a tailspin, losing five of their last six. Their past two losses to the Toronto Blue Jays have forced the team to make several roster changes as Kansas City looks to get back in contention before the All Star game.

To address both injuries and a lack of production in their pitching staff, the Royals have recalled pitchers Nate Adcock and Louis Coleman from Triple-A Omaha. Adcock is 0-3 with a 3.12 ERA in nine games, including two starts with the Royals this season, while Coleman has a 4.91 ERA in 17 appearances out of the bullpen. After a disastrous last outing, pitcher Vin Mazzaro will be heading back to Triple-A. After being handed a 3-0 lead, Mazzaro gave up six runs and 13 hits in only 5 1/3 innings in Kansas City’s 6-3 loss to Toronto. Mazzaro has gone 3-3 for the Royals this season with a 5.70 ERA. The Royals also designated Mitch Maier for assignment. Maier has hit .172 with two homers and seven RBI in 32 games this year.

The Royals only have four games remaining before the 2012 All Star game festivities hit Kansas City, and it will need to get pick up some wins to stay in contention in the AL Central. Tonight, the Royals will try to salvage a four game split with the Blue Jays, playing at 6:07 p.m. Luke Hochevar (5-8) will start for Kansas City, while the red hot Henderson Alvarez (5-6) will start for Toronto. After wrapping up its series with the Blue Jays, the Royals will travel to Detroit for a three game series before the All Star break.