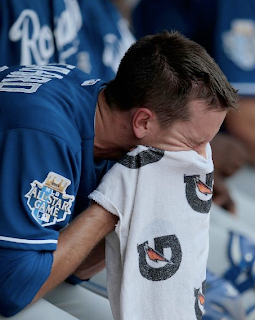 The Royals bats disappeared at the wrong time, and Kansas City wound up getting swept by the Detroit Tigers in the team's final series before the 2012 MLB All Star game.

Apart from a spirited comeback effort in the ninth inning of yesterday's game, the Royals simply failed to consistently muster runs. On Friday, the Royals managed to score only two runs despite finally getting a solid outing from Jonathan Sanchez. On Saturday, the team scored three runs in the ninth in an impressive comeback effort, only to fall 8-7. Today, the bats disappeared again, and Kansas City ended up losing 7-1 in its final game before the all star break.

For the Royals, its recent losing streak came at a very inopportune time. All eyes are on Kansas City with the 2012 MLB All Star game coming to town, and the team had recently pulled within a couple of games of first place and had a .500 record in its sites. The team enters the all star break with a 37-47 record, with an inconsistent offense and a pitching staff decimated by injuries. Hopefully this weekends festivities will get the fans minds off of the current season.