Walks Once Again Doom Royals In Loss To Angels 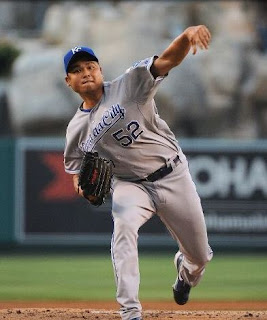 The Royals’ pitching staff has struggled all season long, particularly with allowing walks. The team leads the American League with 344 walks this season, and two key walks ended up being difference makers in the team’s 6-3 loss to the LA Angels last night.

Midway through the game, Kansas City was locked in a tight 2-2 draw, thanks to RBIs early in the game from Alex Gordon and Lorenzo Cain. However, once the sixth inning hit, the Royals’ shaky pitching once again reared its ugly head. Howie Kendrick drew a leadoff walk, and then scored on a single by Maicer Izturis. After the Royals tied the game again when Bryan Pena drove in Eric Hosmer, Kansas City’s Greg Holland sunk the team’s chances with an awful walk in the eighth. The Royals had already gotten two outs in the inning, and Holland faced Peter Bourjos, who entered the at-bat with a measly .223 batting average. Holland walked Bourjos on four straight pitches, and then gave up a three-run single to Kendrys Morales that essentially was the ball game.

The Royals have been walking batters an alarming rate this season, and once it again it came back to haunt them in a crucial situation. Holland’s mistake wasted a decent outing from Chen, who gave up three runs and give hits in 5 1/3 innings. Chen is now 0-2 with a 9.25 ERA in his last five starts, after a hot streak in which he went 7-2 over his previous 10 outings.

Kansas City will face the Angels in LA again tonight at 9:05 p.m. Will Smith (1-3) will start for the Royals, while Garrett Richards (3-1) will take the mound for the Angels.