What Will The Royals Do At The 2012 MLB Trade Deadline? 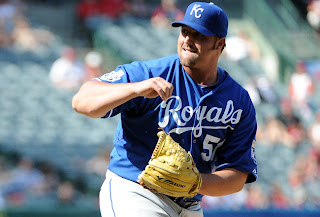 The 2012 MLB trade deadline is only hours away, and some talk has been heating up regarding Kansas City making a deal. Now that the team is almost 20 games under .500 and is officially heading towards another horrendous final record, it is time for Kansas City to consider its future and shed some dead weight.

Perhaps the player that has gotten the most trade consideration lately is closer Jonathan Broxton, who has resurrected his career this year with 22 saves and a 2.34 ERA. Broxton’s numbers were good enough to merit All Star consideration, and teams in the playoff hunt or missing a closer may take a flyer on the right-hander. The Yankees, Angels, Giants and Rangers have all expressed interest. With Joakim Soria returning next year and the Royals out of contention, there really is no need to hang on to Broxton, as good as he has been. Hopefully the team can get some young arms in return, as Broxton has demonstrated strong value all season long.

Kansas City also has two veteran hitters that have become some dead weight to the organization in Jeff Francoeur and Yuniesky Betancourt. After putting together a solid season at the plate last year, Francoeur has struggled this season, batting only .247 with eight home runs. He is a good option defensively, and is a leader in the club house, so Kansas City may be able to find looking for a veteran presence. Betancourt has similar numbers to Francoeur – a .245 average and seven home runs – although he is a bit of a liability defensively.

The final player mentioned in trade rumors is pitcher Jose Mijares, who despite some recent struggles has had a pretty good season. Mijares has posted a 1.72 ERA in 46 appearances, and could be attractive for a team looking for some bullpen help.