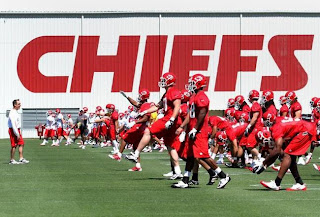 The Chiefs 2012 training camp is officially over, as the team held its final practice yesterday. The team has made some strides, looking very good in its first preseason game against the Arizona Cardinals and establishing a depth chart. However, Kansas City has also suffered a few key injuries, and has several questions to answer with the regular season approaching.

The biggest question for Chiefs fans is the status of All-Pro wide receiver Dwayne Bowe – and at the moment, we don’t have an answer. The team failed to reach a long-term deal with their best wide receiver, and Bowe is currently holding out for a better deal. Some speculate that the team may choose not to resign Bowe, as the Chiefs will have several other important players who will need to be resigned in the near future, including Branden Albert, Jovan Belcher, Glenn Dorsey, Brandon Siler and Dustin Colquitt. Jonathan Baldwin, the team’s 2011 first round pick, had an impressive camp, and the team has other reliable receivers such as Steve Breaston. There is no denying, however, that Bowe makes the Chiefs a better team, and Kansas City is running out of time to get something done.

The Chiefs have also dealt with several injuries, and Brandon Flowers, Cameron Sheffield, DeQuan Menzie and Cyrus Gray will all miss the team’s second preseason game tomorrow against the St. Louis Rams. Flowers’ injury is the most concerning, as his hurt foot has yet to heal. Flowers should be ready to go by the time the regular season starts, but it would be nice for the Chiefs’ best corner to get some preseason reps in.