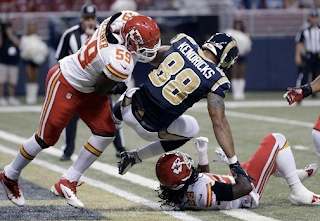 After a hot start to their preseason, the Chiefs looked sloppy last night in a 31-17 loss to the lowly St. Louis Rams. Kansas City's defense struggled, giving up two quick touchdowns against the Rams' first-string offense and 17 total first half points.

The defensive performance has to be worrisome for Chief fans. Kansas City gave up a quick touchdown on St. Louis' opening possession, then allowed the Rams to score only a few minutes later after a costly Jonathan Baldwin fumble. The Rams, who were one of the worst offensive teams in all of football last year, gained 151 yards in the first quarter alone. The Chiefs' D looked great against Arizona, but the Cardinals have some of the worst quarterback play in the league. The Chiefs have a very talented defense, and they are missing their best cornerback, so this may have simply just been a random poor showing.

Offensively, Kansas City didn't fare much better. Cassel played the entire first half, and he put up decent numbers as the Chiefs mustered 10 points. However, turnovers plagued the team all night, as the Chiefs committed four turnovers - three of them fumbles. With the Rams' offensive clicking early, the turnovers proved to be the difference in the game. The team's backups didn't play very well either, as the Chiefs only score in the second half came late in the game, when Brady Quinn hit Jeremy Horne for a 38 yard touchdown.

Many have predicted the Rams to make some improvements this season under new head coach Jeff Fisher, and St. Louis looked sharp last night after getting blown out by the Colts in their first preseason game. The facts are what they are, however, and St. Louis is coming off a dismal 2-14 season in which they averaged 12 points a game. Hopefully this loss will get the attention of the Chiefs' younger players and will help the team get focused with the regular season only a couple weeks away.