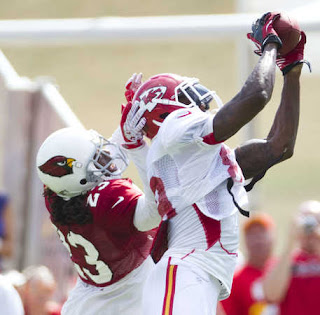 The Kansas City Chiefs hosted the Arizona Cardinals for a joint team practice yesterday, competing with their upcoming preseason opponent in a variety of drills and competitions. There were almost 200 players practicing at one time on the fields of Missouri Western State University, and nearly 3,000 fans were in attendance.

This was the first time in three years that either team had held a training camp scrimmage or joint practice. The Chiefs scrimmaged the Vikings in 2008 when the team still held camp in River Falls, Wisconsin while the Cardinals participated in a joint practice with the Tennessee Titans in Nashville. Many teams had decided to eliminate joint scrimmages due to fights breaking out between the opposing players; luckily there were no scuffles between any Kansas City or Arizona players in yesterday’s practice.

After working individually during walkthroughs and stretching, the two teams went at it in a series of individual drills, 7-on-9, 7-on-7 and 11-on-11 scenarios. The scrimmage wrapped up with both teams’ first-string offenses competing in a two minute drill situation. Matt Cassel and John Skelton were both able to lead their offenses to a field goal in the competition.

The idea for a joint practice came in response to the Cardinal’s travel schedule. The team recently played the Saints in the Hall of Fame Game in Canton, Ohio and is scheduled to play the Chiefs on Friday. Rather than take extra flights to Phoenix, the team decided to stop in the Midwest for a unique practice opportunity and avoid some extra travel.

Both teams plan on practicing separately for the remainder of the Cardinal’s stay in Kansas City; however Chief head coach Romeo Crennel said he would be open to joint practices/scrimmages in the future, should the right opportunity present itself.