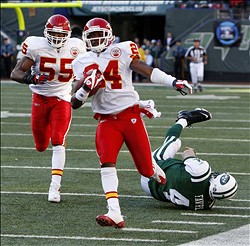 The Chiefs have one preseason game under their belt, and the 2012 NFL regular season is only a few weeks away. The team is still practicing, and there are several important updates that have recently come out of camp.

The biggest concern the team has is the foot injury of starting cornerback Brandon Flowers. Flowers has a bruised heel which has kept him out of practice since July 31. Initially, the coaching staff thought Flowers would only miss a few practices; however now the team is worried that he might not make it back for the team’s regular season opener on Sept. 9 against the Atlanta Falcons. Flowers is a critical component to the Chiefs defense, and it is very concerning that his foot has yet to heal properly. Time is still on the team’s side, and hopefully Kansas City’s top corner can get healthy before the regular season starts.

One of the biggest position battles has been at nose tackle, where Anthony Toribio continues to impress coaches and hold down the starting spot. This has drawn the ire of many Chiefs fans, as Poe was considered a reach by many and now it appears that the team’s first round pick isn’t good enough to win a starting position. Kansas City has done a poor job of drafting defensive tackles in the past, which is likely part of the reason Chiefs fans are so on edge, but this seems like an overreaction. Poe has talent, and Toribio has had an extremely productive camp. The rookie should be given a little more time to learn the ropes, and Chiefs fans should be happy there is good depth at a position that is critical to the team’s 3-4 alignment.

Finally, it appears that Brady Quinn is still the second string quarterback – although this could change in the near future. Quinn was not impressive in the team’s first preseason game against the Cardinals, and he has rotated with Ricky Stanzi in practice lately as the number two QB. If Quinn has another unimpressive performance in the team’s next preseason game, Stanzi will likely get a shot to win the backup QB position behind starter Matt Cassel.