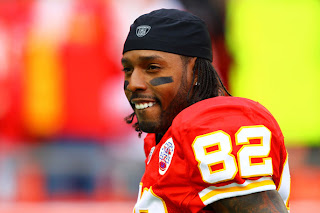 It has been an up-and-down preseason so far for Kansas City - the team looked very sharp in its opening game win against the Arizona Cardinals yet struggled in its second game in a loss against the St. Louis Rams. The biggest story line for the Chiefs is the newly-signed Dwayne Bowe and what role he will play. Bowe recently signed his franchise tender after skipping the team’s entire offseason program and the first two preseason games, so he has had only a few days to learn the new playbook. While he likely will only see a few series, head coach Romeo Crennel has indicated that Bowe will see the field.

Bowe isn’t the only big story line for tonight’s game. The Chiefs are still sorting out some position battles, particularly at back-up quarterback. Brady Quinn and Ricky Stanzi have been battling for the number two spot all preseason, and it appears that Quinn likely has the upper-hand to be next-in-line after Matt Cassel. Cassel has had some injury problems in the past, which makes the team’s QB2 battle intriguing.

Seattle raised a few eyebrows this week when it announced that rookie quarterback Russell Wilson would start the all-important third preseason game. Wilson, a third-round draft pick out of Wisconsin, has played well this preseason, and it appears he has a legitimate shot to win the starting job in Seattle. Most thought that Matt Flynn, who was signed as a free agent to a lucrative deal, would earn the position. Flynn has spent his career spelling NFL MVP Aaron Rodgers in Green Bay, and looked impressive filling in for the Rodgers when he was hurt for a game in 2011 and didn’t play the team’s regular season finale last year as they had already locked up the top playoff seed. The Seahawks will likely be watching both very closely tonight, with the regular season only a couple weeks away.

Game time tonight at Arrowhead Stadium is 7:00 p.m. The Chiefs will wrap up their preseason next Thursday, when the team travels to Lambeau Field to play the Packers.