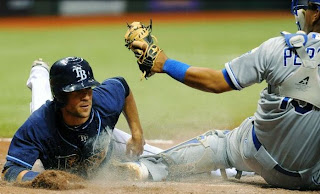 After sweeping the white sox over the weekend, the Royals came back down to earth a bit, dropping two out of three to the Tampa Bay Rays. Kansas City’s lone win came in an epic, extra-innings pitching duel between Like Hochevar and David Price.

David Price is one of the best pitchers in baseball, but on Tuesday, Kansas City’s Luke Hochevar went toe-to-toe with the All Star. Hochevar only allowed one hit while striking out ten, absolutely dominating the Rays and looking like the player the Royals thought they were getting when they selected him first overall in the 2006 MLB draft. Price was nearly as effective, striking out eight while only allowing three hits. The game was scoreless until the 10th inning, when Eric Hosmer hit a two-out single to score Jeff Francoeur. From there, Kansas City’s Kelvin Herrera held the lead, giving him his first victory in the major leagues.

Unfortunately for the Royals, their bats never quite woke up in this series, as they scored only five times over the three game span against the Rays. On Monday, the team only mustered one run off of Jeremy Hellickson, and today, the team got only three on the scoreboard against James Shields. The Rays are the best pitching team in the American League, boasting a 3.27 team ERA, and Kansas City may just have to be thankful they picked up one win thanks to Hochevar’s dominating performance. The team didn’t have many highlights from the plate, but Alcides Escobar did hit an RBI triple in the eighth inning.

The team’s upcoming schedule should provide the Royals with an opportunity to pick up a few more wins, as the team heads to Boston for a four game series with the struggling Red Sox. Game one in the series will be Friday night at 6:10 p.m. Bruce Chen (9-10) will start for Kansas City, and Jon Lester (7-10) will start for Boston.