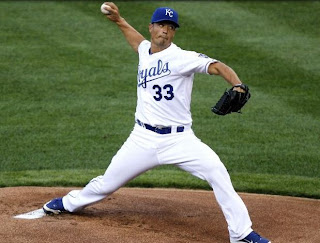 Almost a month ago, the Royals traded the struggling Jonathan Sanchez for Jeremy Guthrie, a pitcher who was also in the middle of a bad season. At first it appeared that the Royals failed to gain anything from the trade, as Guthrie struggled in his first start in Kansas City. Now, that trade appears to be a steal, as the new Royals pitcher is in the middle of an incredible pitching streak and could become a mainstay in Kansas City’s rotation.

Last night against the A’s, Guthrie completely shut down an Oakland team that has been one of the biggest surprises in baseball this season and is currently fighting for a playoff spot. Guthrie only allowed three singles in seven innings, adding a season-high eight strikeouts to completely dominate Oakland. The Royals would use a hot fifth inning to put the A’s away and wound up winning 5-0, improving the team’s record to 50-65 on the season.

It appears that Guthrie is coming into his own in Kansas City, as the pitcher currently has a 15 inning scoreless streak and three strong consecutive starts. He will be a free agent after this season, but it appears that the team may have plans to resign him and offer him a starting position next year. A change of scenery may have been all that Guthrie needed, and he claims that working with Royals pitching coach Dave Eiland has given his game a significant boost. For the moment, it appears that he has impressed both general manager Dayton Moore and manager Ned Yost, and may be part of the team’s future, even though Kansas City will be getting several talented pitchers back from injury next season.

The Royals face the A’s again tonight at home in the second game of the teams’ three game series. Will Smith (3-4) will start for Kansas City, while Brandon McCarthy (6-3) will start for the A’s. The game starts at 7:10 a.m.