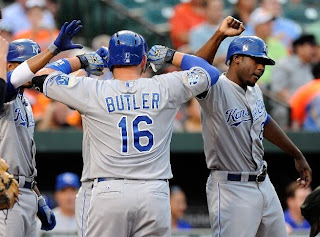 The Royals have been playing some pretty good baseball lately, winning their third straight game last night with a dominating 8-2 victory over the Baltimore Orioles. Kansas City has now won seven out of its past 10 games, and has improved its record to 48-63 on the season.

One big reason the team is winning games is due to a suddenly hot offense, led by Billy Butler and Alex Gordon. Both players homered in the first inning last night, giving the Royals a commanding 4-0 lead early on. Butler has three homers in the past week, and has raised his average to .303 for the season with 23 home runs and 72 RBI. Gordon has also cranked up the offensive production, raising his season average to .294. Gordon is batting .347 since the All-Star break, and while he has failed to provide the Royals’ offense with power, his ability to get on base in front of players like Butler has been very valuable, as has his defense in the outfield.

The Royals have also gotten some strong pitching performances recently, only giving up five total runs over the past three games. The biggest surprise was the recently-acquired Jeremy Guthrie, who was dominate in an eight-inning performance against the White Sox. Guthrie was acquired when Kansas City traded Jonathan Sanchez, and it appeared as if the team had merely swapped one struggling pitcher for another. If Guthrie can turn things around and continue to pitch well, he could find a permanent spot in Kansas City’s rotation entering next season.

The Royals will be back in action tonight, facing the Orioles in game two of the teams’ four-game series. Luke Hochevar (7-9) will start for Kansas City, while Miguel Gonzalez (3-2) will start for Baltimore. The game will begin at 6:05 p.m.