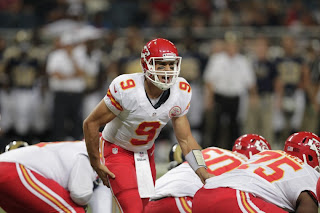 The Chiefs have only one preseason game left, meaning that the team’s regular season opener at home against the Atlanta Falcons is less than two weeks away. There have been several interesting updates regarding the team, from where most pundits expect the team to finish to who has won the backup quarterback position.

Despite being in the midst of another horrible preseason, Sports Illustrated’s Peter King has picked Kansas City to win the AFC West with a 10-6 record. Not only does King thing the Chiefs will make the playoffs, he has the team winning its first round game against the Buffalo Bills (the Bills making the playoffs may be even more of a shock) before falling to the New England Patriots in the divisional round. Kansas City has not won a playoff game since 1994, which means should King’s prediction come true, the team will snap a streak longer than 18 years. King also predicted that Chiefs head coach Romeo Crennel will win the NFL’s Coach of the Year award. Chiefs fans shouldn’t start celebrating – King picked Kansas City’s rival, the Denver Broncos, to reach the Superbowl before losing to the Green Bay Packers.

In regards to the players on King’s future division champion, Brady Quinn has officially been named the second string quarterback entering the season. Quinn had been in competition with Ricky Stanzi during camp for the right to be next-in-line after Matt Cassel, and ultimately won out due to his game experience. Quinn never lit the world on fire in Cleveland, but he was rarely surrounded by good offensive talent. Should Matt Cassel find himself on the IR once again this season, Quinn should be able to keep the team competitive.

Kansas City will wrap up its preseason tomorrow night at Lambeau field against the Green Bay Packers. Kickoff is scheduled for 6:00 p.m.

Aren't the Chiefs in the AFC WEST ?