﻿Just when it appeared that the NFL replacement referee fiasco couldn’t get any worst, last night happened. The Packers lost to the Seattle Seahawks on what will go down in history as the worst, most egregious, asinine and baffling game-deciding play in the history of football. The Seattle Seahawks were given a victory over the Green Bay Packers when a Packer interception was somehow ruled a touchdown.

On the final play of the game, Seattle had to throw a jump ball in the end zone. Seahawks receiver Golden Tate first shoved the Packers Sam Shields so hard that the cornerback hit the ground. The refs ignored what was the most obvious pass interference call in the league’s history and let the jump ball continue. The Packers M.D. Jennings secured the ball with two hands, then hit the ground and rolled over. Replays showed that he had secure possession against his chest. Yet the refs gave Tate the touchdown, then reviewed the play, and ruled the call stood.

This is the lowest moment in the NFL’s history. The league decided to replace its normal officials with low-level college officials, Arena League failures and even refs from the Lingerie League. The end result? An NFL team was blatantly robbed of a victory. Welcome to the 2012 NFL season, ladies and gentlemen. 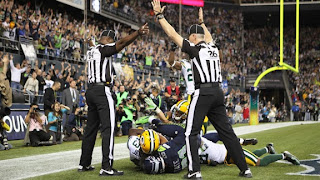 The officials’ decision making was baffling. The one closest to the play waved his hands above his head and prepared to signal for a touchback. The other stood there, frozen… and suddenly raised his hands in the hair to signal a touchdown. Even worse, the officials never held a conference to talk about the play. The play went to review, where it was somehow upheld. How does someone not get a line to the referee’s headset and say “for the love of God call that an interception.”

The officials made the worst call in sports history, but blame the NFL for having them out there in the first place. The league got tangled into a nasty labor dispute with its officials, and thought a rag-tag group could officiate NFL football. NFL fans should not put up with this any longer. Why watch a game for three and a half hours when this happens at the end?

The greatest sports league in America, and possibly the world, has turned into a complete and utter joke.

This was unfortunate for sure, but let's face it, the Packers were getting their asses handed to them by Seattle the entire game. There is no way the Packers win any playoff games this year.