Who Is To Blame For The Chiefs' Terrible Start? 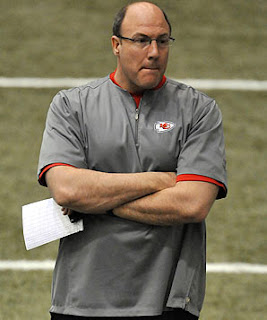 After yet another 0-2 start to the season, Chiefs fans are demanding to know who is to blame for the team’s disastrous start. Kansas City has given up 75 points over the first two games of the season, and looks nothing like a team many thought would challenge for the AFC West division title.

When Kansas City got off to a rough start last season, most pointed the finger at former head coach Todd Haley, claiming he simply did not have his team ready to start the season. Romeo Crennel has received similar treatment from many Kansas City fans, especially because he is a defensive coach. Several media pundits have suggested that Crennel is stretched too thin juggling both the head coach and defensive coordinator positions.

Crennel responded to the criticism yesterday, insisting that the blame rests more on his players failing to execute. Safety Abram Elam and linebacker Derrick Johnson have agreed with Crennel that they need to play better, but both also admitted to the media that communication could be better, and that at times, the players and coaches are not on the same page. If Crennel wants to turn things around quickly, he needs to stop pointing fingers at his players and accept ultimate responsibility for the defense’s performance. Crennel is a lot more expendable than guys like Johnson, Tamba Hali, Eric Berry and Brandon Flowers, especially since this is a second chance for him after his failure as a head coach in Cleveland.

The biggest target for criticism after Kansas City’s start is embattled GM Scott Pioli, who has made headlines recently due to the Chiefs’ refusal to spend money and the stories about his actions told by Haley. Pioli is the ultimate architect of the team, and so far, he has done little to make Kansas City a winner. Many of the Chiefs’ top players were on the team when Pioli arrived, and his biggest acquisition so far has been the signing of quarterback Matt Cassel, who is an average-at-best starting NFL quarterback the Chiefs GM signed to a mammoth contract.

Pioli hasn’t drafted very well either, and the result is that the team lacks significant depth. Kansas City’s horrible preseason record over the past couple of seasons is proof that the Chiefs simply are not very deep, and this ultimately falls on Pioli as well. Coaching and execution play a big role, but you need to have talent on your team to win.

The blame may rest somewhere in the middle of the coaching, players and GM, but one thing is for certain – Kansas City needs to turn things around quickly. If the team drops its next couple of games, the franchise might have to blow everything up and enter yet another rebuilding project.