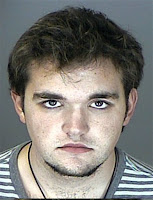 Police have arrested 17-year-old Austin Reed Sigg in the murder case of 10-year-old Jessica Ridgeway, who was killed earlier this month in Colorado. Ridgeway disappeared on October 5 while walking to school, and her remains were found five days later in a field at a park

The death of Ridgeway has become a hot local topic due to her family in the area. Ridgeway’s father, Jeremy Bryant, as well as her other family members addressed the media today in response to Sigg’s arrest.

Sigg’s mother told police that her son had turned himself in, but it is believed that she actually called the police department. Attention has now shifted to who exactly Austin Sigg is what his motives were behind a violent killing of a young girl. Acquaintances and neighbors of Sigg described him as “goth” and a bit of a loner, often dressed in black and could be seen on a skateboard or scooter. Sigg was reportedly interested in mortuary science, but it is unknown what classes he was currently taking at Arapahoe Community College.

Sigg will also be charged with the attempted kidnapping of a 22-year-old woman in another area park, an incident where a runner fought off an individual (thought to be Sigg) who tried to put a rag soaked with chemicals over her mouth.

Hopefully Sigg’s arrest can allow Ridgeway’s family to begin to feel some closure, and let a community that has been shaken to its core begin to heal. Sigg is scheduled to appear in court today, and will most likely be charged and convicted of first-degree murder. Some has speculated that Sigg may have not acted alone; more details should surface as Sigg’s statements and testimonials are made public.