Chiefs Lose Another Home Game To The Raiders 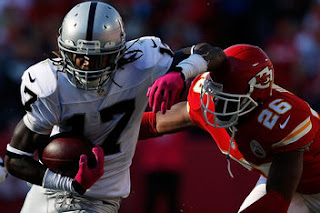 One of the saddest things that has come with the demise of the Kansas City Chiefs organization is how poorly the team has played at Arrowhead Stadium, once considered one of the toughest places to play in the country. Kansas City lost to Oakland on Sunday, the Raiders’ sixth straight win over the Chiefs at Arrowhead.

The Chiefs are heading towards historically bad territory. For starters, the team has not led in regulation this season, the first time since 1940 that a team has gone this deep into the season without having a lead at any point in regulation play. The Chiefs lone win came in overtime over the lowly New Orleans Saints.

The biggest problem for the Chiefs continues to the turnovers – Kansas City committed four more on Sunday and now leads the league with 25 giveaways. Despite once again giving the ball away at will, the Chiefs had a few bright spots offensively. Matt Cassel replaced the injured Brady Quinn and had a decent outing, connecting on 20 of 30 attempts for 218 yards. Quinn looked awful before leaving the game with a head injury, suggesting that the coaching staff once again blew a personnel decision.

The biggest question mark from this game surrounds Jamaal Charles – the Chiefs top offensive weapon was given only five carries in the game, and head coach Romeo Crennel had no explanation as to why Charles wasn’t used more. Cassel ended up being the team’s leading rusher with 35 yards, and Peyton Hillis also received four carries.

There is no way to sugarcoat anything surrounding the Chiefs – this team is really bad and needs to fire its GM, head coach and his entire staff this offseason and start over. Kansas City fans can only hold onto the hope that the team’s next GM will not blow the Chiefs’ top draft pick in 2013, and that brighter days are ahead.