Dwayne Bowe Pushing For Trade Out Of Kansas City 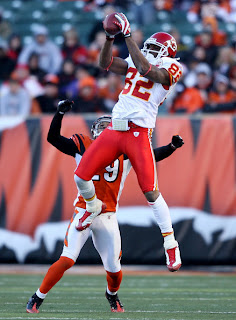 Reports are surfacing that Chiefs wide receiver Dwayne Bowe is pushing hard for an exit from Kansas City. With the Chiefs tied for the worst record in the NFL, many predict that the team will deal Bowe in an effort to blow things up and gain a draft pick or young players in return.

This really shouldn’t be a surprise to Chiefs fans, as Bowe did not receive a long-term deal from the franchise in the off-season. Bowe was given the franchise tag, and reluctantly signed his deal just a few weeks before the regular season started. Now that the Chiefs are 1-5, there is no long-term contract binding Bowe to spend his future with a bad team. Bowe will also be an unrestricted free agent this summer, and at this point it seems like there is no chance of him signing a deal in Kansas City.

With Bowe’s days in Kansas City numbered, it makes sense that the team would trade him now to get something back in return. The biggest team being mentioned in trade rumors are the Miami Dolphins, who have some draft picks to deal after picking up extra second and third round picks by trading Vontae Davis and Brandon Marshall. The Dolphins have talent at running back and spent an early first-round pick on QB Ryan Tannehill, yet have few playmakers at receiver. Bowe would give Tannehill a big body to throw to, and would immediately push the Dolphins into the playoff picture. Miami is tied for first in the AFC East, and with how bad the entire AFC has been this season, they would have a great shot to make the postseason.

If the Chiefs make this move, it is clear they are planning for the future. The team already has a poor passing game, and losing its top wide out would cripple the KC offense. The Chiefs invested a first round pick two drafts ago in Jonathan Baldwin, however the young receiver hasn’t done much so far in Kansas City.

The Chiefs had an opportunity to wrap Bowe up this offseason, but failed to offer him a long-term deal. It is clear that Bowe will be leaving Kansas City once the regular season ends, and it is important for the Chiefs to get something of value in return.

Dwayne Bowe looks like he's eating an apple through a chain link fence.