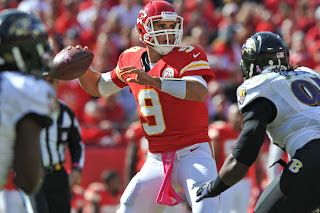 Matt Cassel’s concussion injury sustained on Sunday means he is doubtful for the Chiefs next game against the Tampa Bay Buccaneers. Thus, the Chiefs are entering practice this week planning on starting Brady Quinn.

Chiefs fans have been screaming for Cassel to be benched for weeks, and now they finally will get to see a new QB under center. While head coach Romeo Crennel has not officially ruled Cassel out, the quarterback’s injury and poor play make Quinn the likely starter this weekend. Before getting hurt, Cassel was in the midst of one of the worst statistical seasons a quarterback has had this season, throwing for a league-leading nine interceptions with a quarterback rating of only 66.2.

Brady Quinn’s arrival in Kansas City this offseason brought a great deal of intrigue, and now we are seeing why. Cassel has struggled with both injuries and inconsistent play over the past couple of seasons, meaning that whoever won the Chiefs’ backup quarterback position would have a great opportunity to play. After a stellar career at the University of Notre Dame, Quinn was selected in the first round of the NFL draft. Quinn has struggled to find playing time in his six year NFL career, throwing for a paltry 1,934 yards with 10 touchdowns, nine interceptions and a lowly 67.3 quarterback rating. Kansas City fans are hoping that he can live up to the potential that made him a first round draft pick, but the play over his career should not inspire anyone with a great deal of confidence.

The good news for the Chiefs is that Brady is a traditional quarterback like Cassel, which means the offense does not need to make any drastic changes (as it did when Tyler Thigpen took over at quarterback several seasons ago). Tampa Bay has one of the weaker pass defenses in the NFL, which means Brady should have a good opportunity to get comfortable and have a decent game.

Kansas City fans even went as far as to fly a banner over Arrowhead Stadium calling for Cassel’s benching. Now, they will get to see if Quinn can do any better.

Sounds like we're just exchanging one mediocre guy for another here. We need a draft pick next season, end of story. The Chiefs need to pull the same trick that the Colts pulled last season and tank their remaining games to get the 1st or 2nd round pick. It is our only chance.